Hi everyone! This is a new feature I am pioneering on my site. Each week, I’ll post a list of things I’m psyched about, thinking deeply on, questioning, reading, drinking, or otherwise want to share. Subscribe to the site to receive this in your e-mail box each week. It’s designed to be something you read with a glass of wine or tipple of your favorite whiskey as you wind down the day, and to inspire you for the coming weekend. 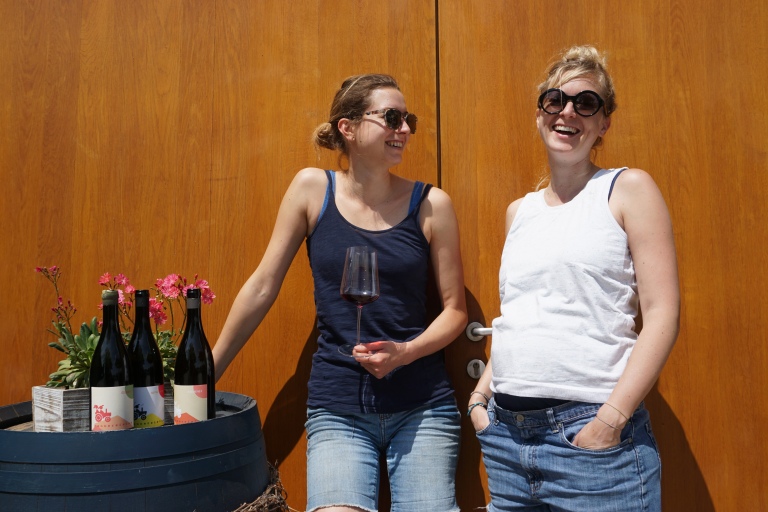 WRITING. The jet-lag from being in Europe is starting to fade, and now instead of being an insomniac all night and watching weird old movies to fall asleep, I feel refreshed enough to look through all my notes from visiting winemakers, and try to figure out what to do with it all! I really enjoyed meeting and interviewing the Renner sisters (RennerSistas is their wine label), a sisterly winemaking duo in Austria’s Burgenland. I love stories like theirs of generational shift and change — converting the family vineyards to organic, making new strides with the winemaking and going for lighter, lower-alcohol styles, and less or no sulfur. You’ll have to wait for Terre’s next issue to get the full story! It seems like so much is happening in that part of Europe. Evidence: in my latest publication, for Playboy Magazine, in which I did not pose in a bikini with a glass of wine (sorry to disappoint), but instead wrote about the philosophy behind the natural wine movement, I also recommended three producers from Middle Europe (Middle Europe is a vague term, but comprises the Czech Republic, Slovakia, Austria, Hungary, and Slovenia) — including two from the Burgenland, where the Rennersistas are located. But you have to read the piece to find out who they are! Link here. Maybe not safe for work? 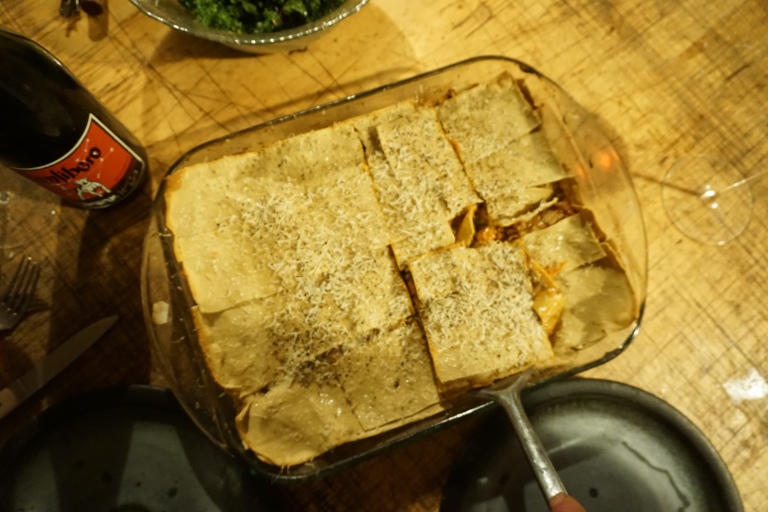 COOKING. It’s getting chilly here in the hills of South Australia, and the other day I was inspired to make lasagna. Obviously, I used Marcella Hazan’s recipe — is there any other, aside from your grandmother’s, worth trying? It turned out to be not just good, but incredibly good, for two reason: one, handmade fresh pasta, and two, freshly ground nutmeg. Do it! And drink this Aglianico from Canlibero while you’re at it. We picked it up in Rome, at a beautiful little wine bar called Caffè Sospeso. Ripe plums and fresh plums with a lovely touch of reduction.

But what I am most excited about when it comes to cooking is that my friends in Portland, Oregon, the rock star somm Dana Frank and super talented chef Andrea Slonecker, finally have pre-orders on for their upcoming cookbook with Ten Speed Press: it’s called Wine Food, New Adventures in Dining, and you can order your copy here. It’s always bothered me that cookbooks, generally speaking, narrowly focus on food, without sharing wisdom as to what you drink alongside, for example, a comforting dish like grilled fish with herby fennel relish. The answer, per Dana and Andrea, in this case: a salty Greek white wine. They walk you through which producers to look for and even how to pronounce grape varieties. It’s a manifesto for making wine accessible without dumbing it down, and for considering wine part of a beautiful meal, rather than making it separate. I am pretty sure this is the ONE cookbook everybody should grab this year. (Also pictured: the May/June copy of Imbibe Magazine, featuring an article I wrote about collaborative winemaking — look for it on newsstands!)

DRINKING. Here’s something I am less into these days: sulfur. I realize that many people have defenses of adding sulfur to wine: it stabliizes the wine, so that it can travel across the world, being the most common one. That’s the reason why importer Kermit Lynch famously asked the winemakers of the Gang of Four, who pioneered sulfur-free and generally non-interventionist winemaking in Beaujolais in the 1980s, to put a bit of sulfur into their wines before shipping them to the U.S. There are a lot of misconceptions about sulfur, which is a preservative added to probably 98 percent of wine, and in some cases naturally occurring, depending on soil types, and I’ve answered them in previous articles (like this one here). But what is interesting to me now is that I’ve personally gotten to the point where I strongly dislike wine made with added sulfites — I can’t even really drink it. I honestly think I’ve developed a sensitivity, as well — the few times in recent months where I’ve drunk wine with added sulfites, I’ve felt very lethargic and even a bit short of breath.

Anyway, the question of how sulfur relates to my personal taste is simpler to explain than any physical reactions: A gift of Dard and Ribo’s Crozes-Hermitage traveled with us from France to Italy, where it was opened with great anticipation. This is a producer not easy to get ahold of, you cuold say, and not terribly cheap, either. On first sip, I was enthralled by the flavor of fresh black olives, the silky texture. But with each glass, I noticed more and more the sense of heaviness in the wine, and the way this heaviness lingered in my body. It wasn’t the booze itself, as the wine was low alcohol: 12.5% ABV. But the addition of sulfur was the unmistakable culprit. How much was added? I would guess between 20-30ppm (parts per million). Not as much as the standard, these days, which is around 40ppm for many small producers. It’s legal to add as much as 70ppm and still call yourself organic, in many places (and still be admitted to the RAW Wine Fair, even, with those levels), and some wineries add up to 120ppm. Anyway, the good news is there are enough winemakers now working without any added sulfites, at all, that I won’t go thirsty. At least, I’ll have my own wines to drink! 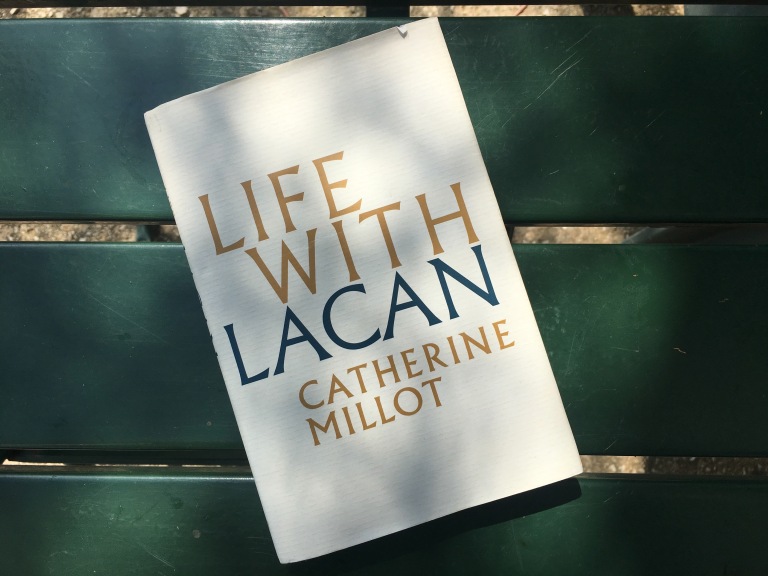 READING. This will be the nerdies section of my weekly apéro hour, for sure! This week’s pick is especially heavy on the nerd factor.

I have a longstanding interest in French critical thought and specifically psychoanalysis, so I was excited to receive an advance copy of this little memoir on Jacques Lacan by Catherine Millot, a French woman who was the lover and student of the famous psychoanalyst for many years, and who also practices the profession herself. I loved in this book how a woman’s intimate testimony sheds light on such an influential yet elusive figure, getting into the squeamish details like Lacan’s infidelity to her, the fact that he unethically kept treating her as an analysand while they were together, his failed attempt to unify intellectual factions in Italy, and his terrible driving skills.

Next up, I’m awaiting delivery of Tao Lin’s new nonfiction book on psychedelics, as well as Sheila Heti’s latest piece of genius, Motherhood. The other day, I managed to get 500 words of a short story down onto the Word Doc. I promised a friend in Paris that I would have a completed draft of a story for her to read, next time I see her — it’s based on a sort of wild night we had together, a night that carried a certain sadness along with glee. I have until September to make this really good!

Thanks for reading and stay tuned for next week. Don’t forget to subscribe to this blog on the right side of the page so you can receive this in your inbox each week!