If you remember something, does it mean that it’s over, in the past? Or does the act of remembering extend that thing’s lifespan, even resurrect it, lend it new meaning?

For those of us who experienced Occupy Wall Street, will it ever be over?

On Sunday, a participatory walking tour was convened to commemorate Occupy’s second anniversary. It began at the Charging Bull statue in Bowling Green, and meandered through Wall Street to Liberty Square (i.e. Zuccotti Park). Along the way, people shared memories of Occupy, as well as oral history of the Financial District’s past: the wall that is today Wall Street was built to keep out the Native Americans, as well as an auction block where Africans were traded. As the speaker put it, Wall Street was since its origination a site of “the privatization of human life.”

In Liberty Square, people mic-checked and recounted the confusion of the General Assembly, the constant fear of police brutality and raids, the various issues with local business (the food vendors), and other ups and downs of the days of the occupation. One woman told of how Occupy had saved her, when she was on the verge of suicide from being chronically depressed about her financial debt and family issues. Through remembering Occupy on its anniversary, people made it so that Occupy was not dead, rather it was a 2-year-old baby, still learning to walk, somewhat naive about the world.

While such stories were being shared in the park, tourist gawked, rebellious Occupiers yelled rudely and waved anti-Occupy flags, and police stood guard with bored faces. Some things never change.

Some leisurely reading for your week off: a story about the time I chased an Upper East Side socialite for the sake of journalism. I wrote this for narrative.ly, a cool new site producing unique stories about New York City (say it three times: unique New York…)

Happy holidays and thanks for reading!

“Suddenly it occurred to me that someone would need to pay for this meal. Someone…meaning me? The freelance writer with $42,000 in student loan debt, wearing socks with holes in them? The writer who barely ever took herself out to lunch, much less some wealthy lady who probably did coke off Andy Warhol’s forearm when she should have been going to college? I panicked at the idea of having to pick up a $300 lunch bill and wrote to Cornelia’s publicist to ‘clarify’ the terms of the meeting. Alas, we would not be ladies who lunch. Instead, we would be ladies having black coffee and green tea, at—per Cornelia’s suggestion—the lowbrow Three Guys Diner on Madison.”

Strike Debt, an Occupy affiliate, just came out with a very well-researched and thorough report on the aftermath of Hurricane Sandy, called “Who Pays for Sandy?” Now, not only is Occupy Sandy one of the main organizations providing relief to communities wrecked by the hurricane, but Strike Debt is one of the leading think tanks working on the issue! Below are some of their main, and quite dismal, findings.

It is pretty remarkable to see an essay like this one in an academic journal, even one as broad and literary as Public Culture.

An excerpt from this essay, “Why I Occupy” by Nicholas Mirzoeff, one of the professors most involved in the Occupy Student Debt coalition in New York:

(Read more about Occupy Student Debt in my 2011 article for The Nation.)

“I live in New York City, where I teach at New York University, and since October 2011 the centerpiece of my intellectual and political life has been Occupy Wall Street. I don’t claim to have been there since ‘the beginning,’ whenever that was, or to be a leader, whatever that means, or still less, to speak for the movement. For better or worse, this has nonetheless been a signature moment in my personal, professional, and political life. It’s only been five months since the first people started to occupy in New York. It has been a year since the Tunisian revolution suddenly changed the sense of the possible and then Egypt made it go viral. The moment seems ancient and modern at once. Vladimir Lenin famously danced in the snow when the Bolshevik Revolution had lasted longer than the Paris Commune. If the encampment at Liberty Plaza did not quite outlast the Commune, Occupy continues, and there’s dancing most days for those so inclined. END_OF_DOCUMENT_TOKEN_TO_BE_REPLACED 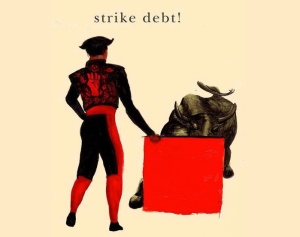 On Nov. 15th, at Le Poisson Rouge, come to The People’s Bailout:

I received a pleasant surprise today when I opened my “Google Alert” (which lets me know when my name appears somewhere online): I learned that author and Harper’s editor Jeff Sharlet includes my essay, “Mic Checked,” on a syllabus for a writing course he teaches at Dartmouth. I’m there alongside Joan Didion’s Slouching Toward Bethlehem and James Baldwin’s “Down at the Cross.” OMG!

“I thought this was the best piece I read on the experience of the Occupy movement. I like it because it’s more or less topical, by a writer breaking radically from her usual style, and because it’s in the second person. I normally forbid the second person for the duration of the term, but I start with this piece to remind students to break my rules when they need to.”