All over Detroit, people are buzzing about Dr. Sushi. His real name is Nick George, and he worked at Detroit’s best sushi restaurant before going out on his own a few months ago. Now, he operates out of residential kitchens, preparing rolls with only sustainably-farmed seafood. Once a week, it’s Dr. Sushi day. His fans order in advance–the other day, he made 24 orders for lunch and dinner–and he works from 7 am until the evening, 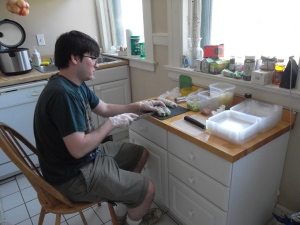 making boxes of sushi that people pick up for a mere $9. Dr. Sushi likes that he can charge so little because he doesn’t pay for the space. And he makes a pretty decent living off the weekly pop-up, too–“enough to live, eat, have beers, and try new things,” he says. Who could ask for more than that, plus some amazing, fresh California rolls?