To readers of mainstream media, it would seem that Occupy Wall Street had been hibernating for the winter—because they weren’t getting much press. In fact, Occupiers spent the winter working hard on movement-building, strategizing, planning, and dealing with internal problems. Here’s an update on how the New York branch of the Occupy movement has been preparing for the Occupy Spring, which is likely to put OWS back in the public spotlight with direct actions, marches, a national strike on May Day, and other tactics means to show government and Wall Street that citizens won’t stand for their undemocratic profiteering. 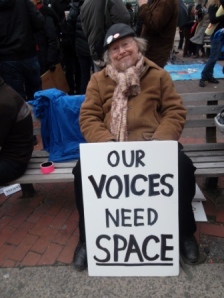 Back in winter…things were tough:

After the eviction—which was emotionally-draining and, in terms of movement-building, logistically challenging–Occupiers rallied on N17 (November 17th, in “Action Culture,” is nick-named N17), with a massive march in New York City and parallel actions across the country. But in December, it became more difficult to access Zuccotti Park (renamed Liberty Square by the movement), as Brookfield Properties’ security forces became stricter and enforced a curfew at night. But meetings went on, at the public atrium at 60 Wall Street and in other locations, as well as over the InterOccupy communication system—where people anywhere join a weekly conference call to discuss what their local Occupy chapters are up to–and plans took shape for an Occupy Spring, slated to be the public resurgence of the movement.

As winter deepened, Occupy faced some internal difficulties. Many people were lodged in churches throughout Manhattan, but others were sleeping in fast-food restaurants because the churches had curfews and restrictions; the lack of a physical

occupation was demoralizing to many. On D17, there was an attempt to occupy a park owned by Trinity Church, who has generally been an ally of OWS; it ended in arrests amidst much debate about whether Occupy was pushing it too far this time.

Coming in from the cold:

In January, there were some exciting initiatives coming out of OWS, 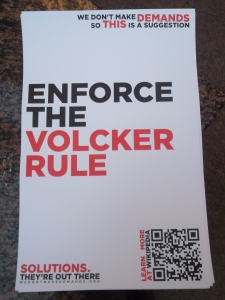 particularly the Occupy the SEC campaign, which drafted a studied public comment letter to the Securities and Exchange Commission regarding the much-chattered-about Volcker Rule, a piece of legislation meant to limit banks’ abilities to engage in risky investment schemes. But meanwhile, within OWS there was tension surrounding one prominent participant who was being asked to leave the movement by another participant who found her behavior—often disrupting General Assemblies with “blocks,” meant to stop a proposal; purportedly lying about aspects of her identity to other Occupiers; once physically attacking another Occupier at a meeting—detrimental to the movement, which sparked a debate about one of the founding principles of Occupy, its unconditional inclusiveness. Anyone can participate in Occupy, even a police officer or a homeless person or a billionaire, and no one can be kicked out, it was determined.

“There are challenges within the movement,” Trish Bou told me in early February in regard to the attempted expulsion of that Occupier, “that have to do with accountability, inclusiveness, fairness, and solidarity.” Bou, a middle-aged woman from New York City, had become involved with a working group called the General Assembly Council, which was mandated with making sure the GA’s integrity was upheld, and that it remained accountable to its founding documents.

“We have the 1% within the movement, trying to create hierarchy and exclusion,” Bou continued. “This is a pivotal time because we are confronting that 1%, mostly white men, who are promoting racism, sexism, and classism.”

To combat those problems, OWS held a Racial Justice Workshop in December, focused on combating racism within activism, organized mostly by the People of Color working group.

There were also some debates about money. For awhile, there was a spending freeze while the movement debated the limits of the Finance group, (and a brief controversy ensued recently when ice cream team Ben and Jerry’s tried to fund OWS–as expected, their offer was not warmly received). Meanwhile, though, actions were continuing. The December 6th Occupy Our Homes action received much attention and signaled that Occupy was focusing its energies on issues at the neighborhood level as well as nationally. Anti-stop-and-frisk protests against racial profiling in Harlem were another sign of that.

For Martin Luther King, Jr. Day, Occupy held a well-attended commemoration event at the historic Riverside Church in Manhattan, where Occupiers and prominent African-American Occupy supporters like Russell Simmons spoke about the connections between racial injustice and economic inequality.

In mid-February, there was a massive protest led by Occupy the DOE (Department of Education) at a meeting of the PEP, a very controversial assembly appointed by Mayor Michael Bloomberg to “vote” (read: support his policies) on educational issues, where twenty-three public schools were closed. Protesters occupied the meeting, chanting “Education is a right,” holding signs about the 13% rate of blacks and Latinos who graduate high school prepared for college, and drowning out the meeting’s goings-on with the human microphone.

Throughout late winter, public Occupy Town Square events had been creating “mini-occupations” throughout New York City in highly-trafficked sites such as Washington Square Park. At that park, in late January, passersby caught a smorgasboard of Occupy offerings: the Think Tank, which moderates debates on political topics; the Student Debt Campaign, who performed a play about the education debt crisis in the U.S.; a group of doctors and medical students had a teach-in about the need for universal health care; even the drum circle many remember from Zuccotti Park was present. 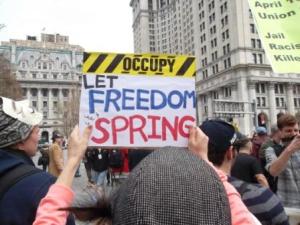 Shockingly warm weather in NYC in March led Occupy back into the streets in large numbers, resulting in a renewed conflict with their old friends, the New York Police Department. Small direct actions had been going on consistently since the eviction—such as one aimed at Bank of America—but higher temperatures promised bigger crowds. At the end of February, a “Shut Down the Corporations” day of protest gave Occupiers a sense that the police were being overbearing; a few weeks later, the veracity of that suspicion seemed apparent, when Occupiers who were in Zuccotti Park on Saturday, March 17th, the six-month anniversary of the movement, watched 73 of their companions arrested and numerous incidents where police pushed, beat, or otherwise mistreated protesters. One woman reportedly had seizures while in handcuffs; her fellow Occupiers looked on helplessly while her head hit the pavement repeatedly as she convulsed, and the police refused to tell anyone whether medical attention would be provided to her.

It was a traumatic event for those present as well as all Occupiers who have seen or experienced how the NYPD typically treat protesters. A few days later, there was a “heal-in,” where people shared their feelings about the M17 incident. Occupiers listed the emotions they felt at the start of the meeting: sad, love, realization, uncertain, worried, “I’m just despondent,” “Love and rage,” furious, scared, energized, more rage, and more love. Then they shared their stories from Saturday night, with much weeping and hugging.

Meanwhile, the Occupation had moved uptown, to Union Square, a much more visible site than Zuccotti Park. All the usual suspects were there: the People’s Library, the anarchist info table, the daily deliveries of food prepared by the OWS Kitchen, teach-ins about Direct Action. The focus turned completely to Spring Training. Weekly marches began taking place on Friday afternoons around Zuccotti Park, so Occupiers could get ready for dealing with the NYPD on May 1st, when a nation-wide strike is scheduled.

When Trayvon Martin was shot to death in Florida by a man who didn’t like the looks of a young black male in a hooded sweatshirt in a neighborhood where he didn’t seem to belong, Occupy Wall Street was joined in Union Square not only by nearly 2000 people wearing hoodies in solidarity for a rally and march against racialized violence, but also by the grieving parents of the slain 17-year-old boy. One after another, people of color spoke out through the human microphone about the injustice they had experienced merely because of their skintone. But at midnight, that night and on others, the police tried to enforce a curfew on Union Square—something that is not normally done; typically people hang out in Union Square until the wee hours of morning, unperturbed—as if trying to show that Union Square will not become another Zuccotti Park.

Occupy’s public face is beginning to show itself more and more as spring carries on. The lack of a physical occupation site made it difficult for the movement to wage a public relations campaign, but it was never hibernating. Occupiers were hard at work, canvassing in low-income outer-borough neighborhoods, organizing Town Squares, preparing for their spring offensive, dealing with internal trauma and organizational difficulties, and waging policy reform initiatives like Occupy the SEC. These signs point to growing, not waning movement, and suggest that the American Autumn may become an entire year of consistent critique and political action.

Want to get involved or learn more? Check out these links:

all photos by Rachel Signer, copyright 2012